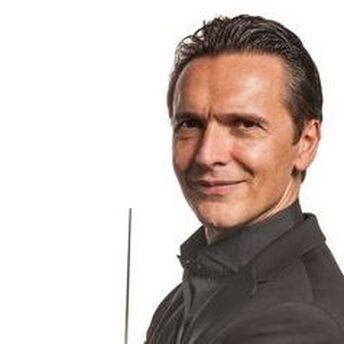 One of the most sought-after musicians in the Pacific Northwest, French conductor, composer and guitarist Christophe Chagnard is an all-around artist acclaimed for his finely etched performances and charismatic approach to music. Equally versed in a vast repertoire of symphonic, operatic and ballet works of all styles and periods, Chagnard has gained a reputation as an insatiable conductor who can do it all.
​
Chagnard was Music Director of LUCO from 1999-2019.  Under his visionary and relentless leadership, LUCO has flourished into one of the finest community orchestras in the region. Highlights included a collaboration with legendary actor Michael York on the Hovhaness Centennial Celebration at Benaroya Hall and highly acclaimed performances of Mahler’s 1st
​and 5th Symphonies at Meany Hall.

Chagnard co-founded the Northwest Sinfonietta in 1991 and was its Music Director until 2015.  For over two decades, Chagnard built what the Seattle Post-Intelligencer calls “the finest chamber orchestra in the Northwest.” Chagnard has performed with some of the biggest names in music, including Lynn Harrell, Nadja Salerno-Sonnenberg, Cecile Licad, Richard Stoltzman, Lara St. John, and Awadagin Pratt. Chagnard’s international guest appearances include performances in Russia, Japan and Cuba. His awards include the 2006 ArtsFund Outstanding Achievement in the Arts Award, and the Richard Levy Award for outstanding musicianship for three consecutive years.  Most recently, he received the 2016 French-American Business Cultural Award.

Chagnard is also a prolific composer whose works have been heard widely across North America and in Europe. In 2010, his ground-breaking composition Opre Roma! for three gypsy jazz guitars and orchestra was critically acclaimed. His Embargo, Suite Cubana was premiered in 2013 as a vibrant tribute to Cuban music and culture. In 2015, Chagnard conducted the premiere of his Terra Nostra, a multi-media symphonic work commissioned with climate change as its subject matter. He is currently working on Gaman, a new commission by Music of Remembrance based on the Japanese relocation and internments in the U.S. during WW II and to be premiered in 2018.

Chagnard received his musical training in composition and conducting from Berklee College of Music and New England Conservatory where he studied with Frank Battisti, Benjamin Zander and Pascal Verrot and graduated with Academic Honors. Chagnard served on the faculty of the Berklee College of Music (1992-1992) and in 1993; he became the first Music Director of the New England String Ensemble in Boston. He also served as Director of Orchestras at the University of Puget Sound (2001-2012).  Chagnard brings the finely-honed sensibilities of the chamber musician to orchestral performance. His commitment to music of our time, cross-genre collaborations, a keen interest in mentoring and encouraging young musicians, and an easy manner in front of audiences help make him the complete musician.